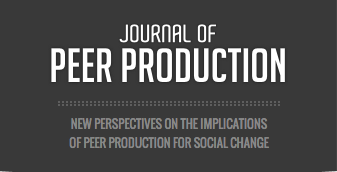 One of the welfare state’s key jurisdictions was to tend to housing and public space in benevolent ways. However, under the neoliberal dogma, commodification and gentrification threatens both the right to housing and the right to the city while in recent years, cities have become increasingly militarized and surveyed, resembling battlegrounds where freedom and democracy are under attack. At the same time, recent economic, political, and social crises have activated many counter-forces of resistance and creative alternatives for the grassroots production of food, health services, housing, networking infrastructures, and more.

The role of technology has been contradictory as well. On the one hand, the Internet has enabled some of the most remarkable peer production success stories at a global scale, such as Wikipedia and Free and Open Source Software, among many others. On the other hand, it has empowered huge corporations like Facebook and Google to fully observe and manipulate our everyday activities, and oppressive governments to censor and surveil their citizens.

At the city scale, technology offers opportunities for self-organization, like wireless community networks and numerous bottom-up techno-social initiatives, but also animates the top-down narrative of the “smart city” and the commodification of the “sharing economy as a service” provided by globally active platforms such as Airbnb and Uber. In this situation, peer production in space emerges as a vital bottom-up practice reclaiming citizen participation, and inventing new forms of community.

To address those challenges one needs to take into consideration the following:
– Lessons learned from the Internet and how they may be incorporated in the context-specific realities of the city.
– Knowledge-transfer methodologies across different localities.
– Interdisciplinary and transdisciplinary collaborations (urban studies, media studies, sociology, architecture, cultural geography, informatics etc.).
– Possible collaborations and synergies between activists that fight for the “right to the city” and those that fight for the “right to the Internet”.
-Knowedge/experience transfer between non-urban settings (i.e. intentional communities, ecocommunities, the Transition movement, etc.) and the urban movements.
– Inquiry into research methods and methodologies to be developed and used for analysing ICT-mediated peer production in urban space.

This special issue aims to explore a wide variety of alternative and innovative peer practices, like urban agriculture, food sustainability, solidarity economy, right to the city movements, cooperative housing, community networks, P2P urbanism tactics, co-design practices and more, that are directly reflected in the production of urban space. We are particularly interested in novel combinations of theory, methodologies, and practices that can contribute to peer production in the city and enable new synergies between projects and communities.

Topics may include, but are not limited to:
– Urban commons and peer production
– Case studies of innovative peer practices approached from different perspectives
– Comparative case studies on patterns of commoning and think-global / act-local methodologies
– The regional dimension: examples from the Americas, Europe, Asia, Africa, Australasia
– Political issues of autonomy, hegemony, labour, gender, geopolitical and post-colonial perspectives
– Alternative forms of education and learning tools for promoting self-organization and community
– Innovative governance tools for peer production in the city
– Interdisciplinary and transdisciplinary methodological approaches
– Urban studies and the right to the (hybrid) city
– Open source urbanism/architecture
– Recycling/upcycling vs buying: making, consuming or prosuming the city?

Submission guidelines
Abstracts of 300-500 words are due by January 31, 2017 and should be sent to city@peerproduction.net>. All peer reviewed papers will be reviewed according to Journal of Peer Production guidelines. See http://peerproduction.net/peer-review/process/. Full papers and materials are due by May 15, 2017 for review. Peer reviewed papers should be around 8,000 words. We also welcome experimental, alternative contributions, like testimonies, interviews and artistic treatments, whose format will be discussed case by case with the editors.

*This special issue was initiated during the Hybrid City III (Athens) conference and developed further during the IASC Urban Commons (Bologna) and Habitat III (Quito) conferences.