How important is natural light? Which kind of negative effects can excess light inflicts on the natural environment? How many species are affected by light pollution?
Light pollution is a serious thing, with enormous negative effects on the environment, the economy, and the population. It as been scientifically proven, for instance, that human pathologies such as insomnia or stress can be related to light
excess.
Experts on the topic are confident that light pollution matters and it has to be drastically reduced. High-level organisations share this worry. The United Nations named the 2015 the International Year of Light in order to foster the debate on the topic improving citizens’ awareness.
Building on the relevancy of the topic, STARS4ALL is in the first line to fight against light pollution. STARS4ALL is creating a structured community of people aware of the problem and ready to fight against it. The community will be created through the engagement of all potentially interested people, from amateurs to experts, in activities such as games, seminars, events and the streaming of astronomical events.

We all live under the same sky, so why don’t share the same community?

Digital Social Innovation can be several things, but it is certainly the bridge between technology and people. This is why STARS4ALL has developed this connection, by relying on what people like most: games!
With specific reference to the light pollution issue, the Night Knights web-based game involves users in the classification of images taken from the International Space Station (ISS). The game, played in pairs of randomly chosen players, draws upon the fun element to initiate people on the topic of light pollution and to consolidate a community of people that share same interests and values. The game is also linked to the open competitions launched by STARS4ALL. In 2017, two competitions which reached around a hundred participants awarded two students who participated the chance to observe a solar eclipse in the Unites States.
The engine behind the Night Knights game is also made available open source as a “game enabler”: a software component that any developer can re-use to build his own game to engage users in collective awareness campaigns. 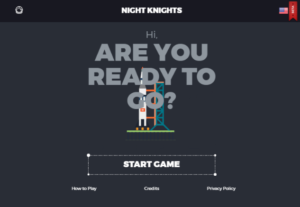 Interested persons can access the games through the link below: they need only an internet-connected device (PC, tablet, mobile) with a Web browser. Interested developers can download and reuse the open source code of the game enabler, released with an Apache 2.0 license.

Just accessing the website people can start playing improving their knowledge about the sky. The game is available in different languages and it is suitable for any kind of user.

Night Knights is a web application representing the gwap-enabler raw implementation for the game, to test it:

to enable a social network login register the app in the corresponding registration page and update the index.html with the corresponding client ID obtained;
for twitter you need to register it also on the HelloJS proxy service at https://auth-server.herokuapp.com/